The chilling adaptation of the acclaimed novel by Susan Hill, author of The Woman In Black

Featuring Douglas Henshall, Louise Lombard, and Neve McIntosh, The Small Hand is the story of Adam Snow, an antique book deal who finds himself haunted by the ghost of a young boy, which reveals a terrible secret from his own childhood. 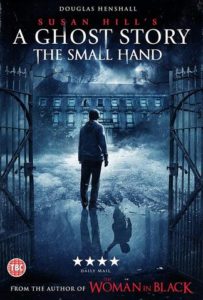 Produced by Awesome in co-production with Two Rivers Media, for Channel 5, with the support of Screen Scotland, this feature drama debuted on Boxing Day as “Susan Hill’s Ghost Story” on Channel 5 to strong ratings. It’s now out on DVD. Order it from places like HMV, amazon, or Simply Home Entertainment.

Synopsis: Returning to Scotland for the first time in years stirs up uneasy memories for Adam Snow (Douglas Henshall, Shetland, Outlander). He longs for the beautiful Alice (Louise Lombard, CSI: Crime Scene Investigation), wife of his client, and faces the realisation that he has barelybeen present for his fragile brother Hugo (Cal MacAnich, The Victim), who is suffering a mental breakdown. While visiting Alice, Adam develops a fascination for a formerly majestic mansion nearby, Raven’s End. Seeing this as a chance to be closer to Alice, as well as to his brother, he decides to buy Raven’s End and to finally put down roots.While working on the renovation and secretly planning a new life with Alice, Adam is plagued by haunting dreams, visions and visits from a ghostly child. Fearing he may be suffering from the same fate as his brother, Adam is determined to untangle the truth and excise the spirit from his life. But his coming to Raven’s End has set in motion a chain of sinister events linked to his past and a painful secret to which Adam’s family holds the key.